Quincy Wheeler
Jefferson, Ohio, United States
To be the image of Jesus - Romans 8:29

Books for Fans of the Lord of the Rings 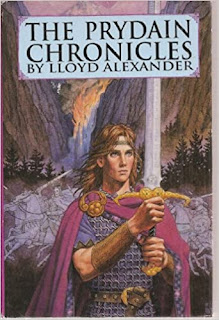 My family and I have always been huge fans of the Lord of the Rings, as an exciting story, with rich and memorable characters, set in a world built with amazing depth, and filled with themes that inspire us to be better people. The only problem is that after you finish reading everything that Tolkien wrote, you wish someone else could write something similar. So, I've been searching my whole life for similar efforts by other authors, and I thought I would create an ongoing list of those resources which I have read and enjoyed.

1. The Chronicles of Narnia - C.S. Lewis (Ages 9+)
I'm sure Tolkien was appalled by Lewis's use of allegory and somewhat haphazard world-building attempts, but I don't think any collection gave my imagination more scope and inspired me to be a better human being like the LOTR did more than Lewis's.

2. The Space Trilogy - C.S. Lewis (Ages 13+)
There is a brief moment where in Lewis's final work of this Trilogy, That Hideous Strength, he briefly makes the book a crossover with the LOTR. I imagine Tolkien didn't love that, but Lewis does a better job world(s)-building here, and his ideas, as always, are born of unparalleled genius.
3. Watership Down - Richard Adams (Ages 9+)
Who would believe that a book about rabbits would have such amazing world-building and be full of characters that inspire one to be a more courageous and noble human being? There is also a book called "Tales from Watership Down" that is well worth reading.
4. Time Quintet - Madeline Le'Engle (Ages 14+)
I would skip "An Acceptable Time" the concluding effort to this series, but there is a depth and resonance to this series that reminds me of the Lord of the Rings. It can also get creepy when needed, which is an underrated aspect of the LOTR.
5. Series of Unfortunate Events - Lemony Snicket (Ages 11+)
Somewhat a satire, somewhat a fantasy, somewhat a mystery, Series of Unfortunate Events surprises you how it sucks you into its world and makes you feel immensely for its characters.
6. The Pendragon Cycle - Stephen Lawhead (Ages 15+)
Tolkien was always clear that the Lord of the Rings was meant to be set in a real world environment, even with its elves, hobbits, dwarves, orcs, trolls, etc. So, I find that some historical novels do a great job getting at the feeling of the LOTR, probably because they are based on a world that human beings have been building for many thousands of years. Lawhead's re-imagining of the Arthur legend is well-worth reading.
7. The Chronicles of Prydain - Lloyd Alexander (Ages 9+)
These books based on Welsh myths have a LOTR feel at several points, with a cuter, gentler Gollum-type character. Highly underrated. The 12 year old Quincy was thrilled to find these with a LOTR craving after finishing the Tolkien omnibus.
8. The Scions of Shannara - Terry Brooks (Ages 13+)
Slightly older Quincy was thrilled to find these books. I find some of the Shannara books that Brooks has written to be derivative of Tolkien, but this series has plenty of originality and some good world-building. I highly enjoyed them.
9. The Buried Giant - Kazuo Ishiguro (Ages 14+)
This book has heavy metaphor, but the metaphor is beautiful (I honestly think about it almost daily), and it has dragons and plenty of fantasy elements.
10. Harry Potter Series - J.K. Rowling (Ages 12+)
Rowling built a beautiful world under-girded with Christian morality. The issue of magic is important to keep in mind, but I think she keeps it effectively separate from the Satanic magic that actually exists in the world. If it offends you conscience, however, don't read it.
11. The Cadfael Chronicles - Ellis Peters (Ages 14+)
Amazing mysteries containing romance, swashbuckling sword fights, and a beautiful world of history. Also, Brother Cadfael shows us the heart of Jesus in how he responds to every situation.
12. Bloodstone Chronicles - Bill Myers (Ages 10+)
Highly allegorical, but very clever, original and fun for teens. I don't know that anything helped me understand the atonement of Jesus better than the second book in this series, and I think about the lessons of the last book in the series constantly.
13. The Trilogy - Henryk Sienkiewicz (Ages 14+)
It's dense, but there is a lot to like about these novels diving into the history of Poland's people. Romance, battles, good and evil. I need to re-read them when I have the chance
14. The Once and Future King - T.H. White (Ages 12+)
This is another great re-telling of the story of King Arthur, a story with which Tolkien was familiar. Archimedes the owl was a genius addition.
15. The Redwall Series by Brian Jacques (Ages 11+) - Jacques does a great job building a world and giving you characters to love. The series gets a bit repetitive, but definitely hits LOTR-type notes! Check it out!
16. King Raven Trilogy - Stephen Lawhead (Ages 13+)
I've always loved the Robin Hood legend, and Lawhead places it in its most realistic historical context here, and gives some good spiritual lessons to go with it. As always, he can write a stirring adventure with the best of them.
17. Earthsea Cycle - Ursula K. Le Guin (Ages 11+)
Le Guin built a beautiful world here, and the plot, but the characters are a bit shallow for me.
18. Wings of Dawn - Sigmund Brower (Ages 10+)
A great standalone adventure. I HIGHLY recommend it, and it has some great spiritual themes.
19. The Dun Cow Trilogy - Walter Wangerin, Jr. (Ages 12+)
A very unique allegory about the redemption of Christ as seen in the animal kingdom.

I will continue to add to this list as I explore other works of fantasy/historical/science fiction that remind me of the Lord of the Rings.
Posted by Quincy Wheeler at 12:46 PM No comments: